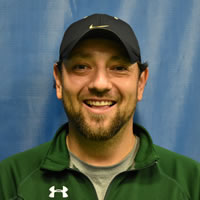 Owen Suagee is a USPTA certified tennis professional with over 10 years of post-collegiate experience in the tennis industry. Owen was raised in Omak, Washington where he competed in tennis and football in high school and won state titles in both sports. After high school he competed on the team at Linfield, College, where he finished his career as a team captain and an all-conference player. After college he worked at West Hills Racquet and Fitness Club in Portland, Oregon. During his time in there, Owen was also the assistant men’s tennis coach at Willamette University in Salem. In 4 years at WU the Bearcats made 2 conference title matches and set records for most wins in a season. Most recently, Owen was the Head Pro at Wenatchee Racquet and Athletic Club in Wenatchee, WA and the high school coach in Chelan, WA. In his free time Owen enjoys playing pickleball, lifting weights, camping and hiking.